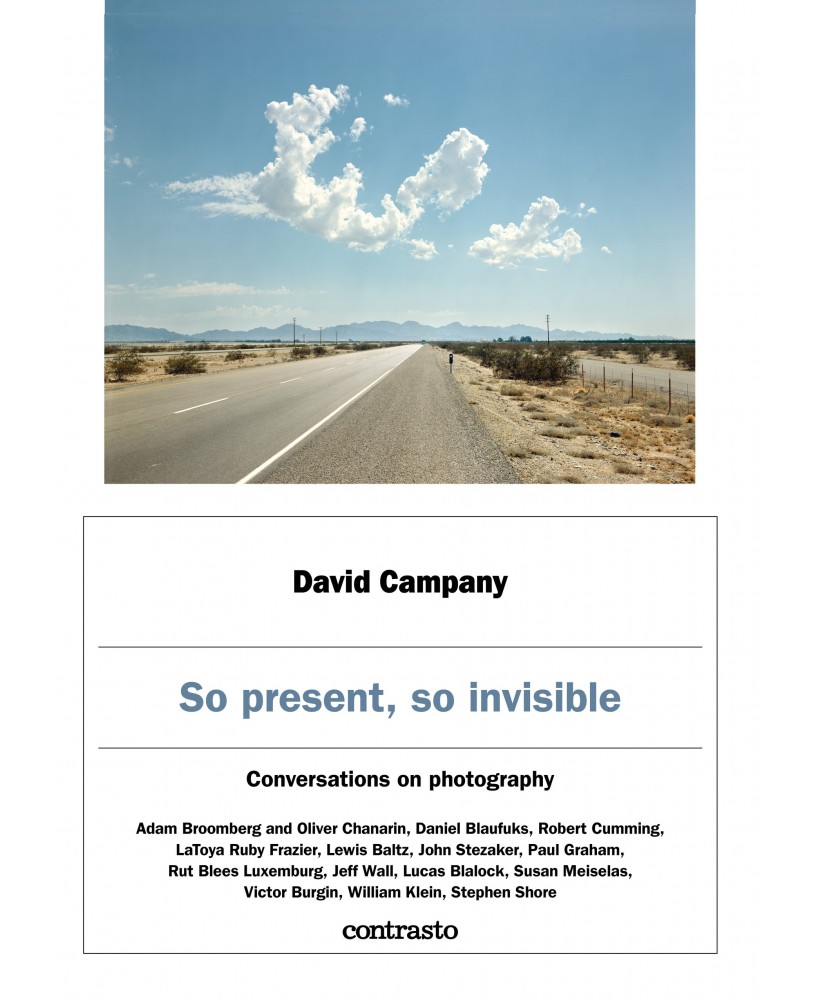 So present, so invisible

Photography is the easiest thing to talk about, and for that reason it can be the most difficult. There is a lot of casual chat about it, just as there is a lot of casual photography. But there have always been articulate voices, able to see past the obvious, around the distracting, and through the trivial to say something about the more profound aspects of the medium.

The critic and exhibitions curator David Campany, often invited by photographers and museums to write about their practice during his career, talked with world-class artists – Adam Broomberg and Oliver Chanarin, Daniel Blaufuks, Robert Cumming, LaToya Ruby Frazier, Lewis Baltz, John Stezaker, Paul Graham, Rut Blees Luxemburg, Jeff Wall, Lucas Blalock, Susan Meiselas, Victor Burgin, William Klein, Stephen Shore – to interrogate them about their past, the various creative phases they crossed over, and above all their rapport with photographic medium and reality.
That is why these conversations transcend the dimension of the simple interview to reveal the close connection between art and author, between photography and the world, between thought and speech. Because, as noted by the author in his introduction, “whether long or short, nearly all these conversations were open-ended. Neither party knew where we might be going or where things would end up. For me, that is always the real value of a conversation, as opposed to an interview (or a questionnaire). There is risk and excitement, a sense of mutual exploration and speculation”.

David Campany is a writer, curator and artist, working mainly with photography. Campany’s books include A Handful of Dust (2015), The Open Road: photography and the American road trip (2014), Walker Evans: the magazine work (2014), Gasoline (2013), Jeff Wall: Picture for Women (2010), Photography and Cinema (2008) and Art and Photography (2003). He has written over two hundred essays for museums and monographic books, and contributes to Frieze, Aperture, Source and Tate magazine. Recent curatorial projects include The Still Point of the Turning World: Between Film and Photography, FoMu Antwerp, 2017; The Open Road: photography and the American road trip (various venues, USA, 2016); A Handful of Dust (Le Bal, Paris, 2015; Pratt Institute New York, 2016; the Whitechapel Gallery London, 2017; The California Museum of Photography, 2018; and Moderna Museet, Stockholm, 2018); Walker Evans: the magazine work (various venues – France, Poland, Belgium, Italy, Australia and New Zealand), Lewis Baltz: Common Objects (Le Bal, Paris 2014); Victor Burgin: A Sense of Place (AmbikaP3 London, 2013); Mark Neville: Deeds Not Words (The Photographers’ Gallery London, 2013); and Anonymes: Unnamed America in Photography and Film (Le Bal Paris, 2010). David Campany has a Phd and teaches at the University of Westminster, London. For his writing, he has received the ICP Infinity Award, the Kraszna-Krausz Book Award, the Alice Award, a Deutscher Fotobuchpreis, and the Royal Photographic Society’s award for writing.